Erectile dysfunction, the inability to achieve or maintain an erection for satisfactory sexual performance, can have dramatic negative effects on a male’s quality of life. Erectile dysfunction can often be caused by dysfunction or atrophy of the ischiocavernosus muscle, a primary muscle responsible for maintaining penile rigidity that is found along the length of the penile shaft. These symptoms can be mild resulting in difficulty maintaining potency to severe resulting in the inability to achieve penetration. An erection consists of two phases: the vascular phase and the muscular phase. During the muscular phase or rigidity phase, the ischiocavernosus reflex can trigger ischiocavernosus contractions that create pressure by compressing the corpus cavernosum. The corpus cavernosum is composed of spongy erectile tissue and is responsible for facilitating erections by filling with blood and preventing compression of the urethra during erections. This process maintains penile rigidity during intercourse. The ischiocavernosus muscle can be strengthened like any other striated, skeletal muscles in the body. ¹ 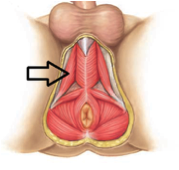 Studies support the use of pelvic floor physical therapy for treatment of men with erectile dysfunction:

Erectile dysfunction may also occur due to specific co-morbidities. Men post radical prostatectomies are at high risk for developing erectile dysfunction due to intraoperative injury to neurovascular bundles. Prota et al observed the effects of pelvic floor biofeedback training in 52 men post-radical prostatectomy and its effects on recovering erectile function. Men in the treatment group began receiving pelvic floor biofeedback on post-op day 15 once a week for 30 min sessions for a total of 12 weeks by a physical therapist. Results showed that time to recover the ability to achieve an erection were significantly lower in the treatment group versus control group. Additionally at 12 months post op, more subjects in the treatment group were considered potent versus the control group. Thus, early pelvic floor biofeedback muscle training post-op radical prostatectomy has a significant impact on recovery of erectile dysfunction. ⁴

Erectile dysfunction can be a common complaint among men with heart disease and may be an early marker of symptomatic cardiovascular disease. Sedentary lifestyle can increase the risk of erectile dysfunction by two-threefold. Men post-acute myocardial infarction (heart attack) experiencing erectile dysfunction who are at low cardiovascular status can benefit from an unsupervised home-based walking program four times a week for symptom improvement while also increasing functional capacity. Physical therapists are qualified in helping develop optimal home- based walking programs for patients that are enjoyable and easy to do alone, with a friend or partner. ⁵

If you are a man experiencing pelvic floor issues such as erectile dysfunction physical therapy can benefit as part of your overall treatment plan. The team at New Dimensions Physical Therapy can help fully evaluate your pelvic floor function, taking in orthopedic and cardiovascular considerations to help conservatively improve your symptoms. We use evidence- based research to help our patients achieve their optimal level of function.